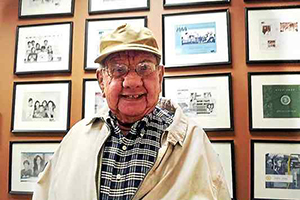 The Clyde S. Walton, Inc. family was saddened to learn of the passing of Richard Stricker, a longtime Walton employee and friend.

In 1959, founder Clyde Snyder Walton hired Stricker as the company’s first service technician. Previously, he had been a self-employed heating contractor. Stricker remained a part of the Walton family for 34 years as a design technician, and always made sure to keep in touch following his retirement.

Ray Walton, son of Clyde, told Lansdale’s Reporter “My father was always experimenting with steam cars, and trying to make a better boiler, that sort of thing, and Richard would come watch him, trail along behind him.” Ray also told The Reporter that Stricker “had a ‘brilliant’ mind when fixing and repairing heating systems”.

Lansdale has lost one of its icons, but the memory of Stricker will live on through his work with the Lansdale Cemetery and the Lansdale Historical Society.

Read more about his accomplishments here.