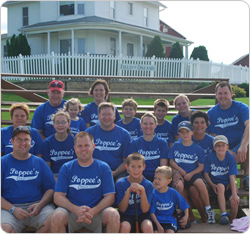 For 100 years, Clyde S. Walton has provided outstanding service to communities in the North Penn area. Founder Clyde Snyder Walton started his business in 1921 at the corner of Broad and Hancock Streets in Lansdale, the same spot the company occupies today.

The original business was a gas station and car dealership, but in 1936 Mr. Walton entered the fuel oil business, starting with a single truck. Three years later, business was so good that he installed a 12,000-gallon tank on the premises. In 1940, a second truck was purchased and Mr. Walton’s 16-year-old son, Raymond, joined his father in making deliveries. In the years after World War II, the company steadily expanded its fleet of vehicles and its service staff. We added a 257,000–gallon tank in 1962 and a 425,000–gallon tank in 1977.

Keeping the business in the family, Raymond’s son, Terry, joined the company in 1976. Ten years later, Terry and his wife, Diane, took over the business and have continued to expand it. In 1986, they installed the only 24-hour, unattended fueling station for fleet vehicles in Lansdale. In 1993, they began selling and servicing natural gas heating systems, and in 1998, they started offering duct cleaning to their customers.

Clyde S. Walton—a company with a rich history and a bright future.