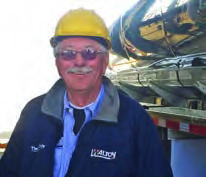 “I’ve experienced three generations of respect and kindness, from Ray Walton to Terry and then his sons.”

After decades of working for us and expertly taking on a variety of roles, Bill Lutz will be retiring—sort of.

“I’m going to be shifting to part-time work starting in June. Retirement is going to be a big change so I’m easing into it,” says Bill.

Bill joined our team in January 1978, when Ray Walton hired him as a driver. Over the years, Bill has always been willing to pitch in and help wherever needed, learning different parts of the business along the way.

But his preference remains transporting fuel in a 40-ton tractor-trailer.

“It’s demanding and I enjoy the challenge, especially in the winter,” he says.

Bill says he has remained a vital member of our team this long because he has always been treated well.